Tyler and Megan Jolly have been running Jolly Heating & Air Conditioning for years without a hitch, but they discovered new opportunities for exponential growth with modern software.

Before implementing ServiceTitan, they couldn't determine what jobs were most profitable, where they were losing money, and if their ads were seeing a positive ROI.

And what are they learning now with ServiceTitan's dynamic, real-time data?

"Everything," laughs Tyler. "We want to see literally every part that we move through. Every dollar spent, dollar made, so that we can break it down among our different job types to know what kind of productivity, or lack thereof, that we have."

“Everything Was a Guess” 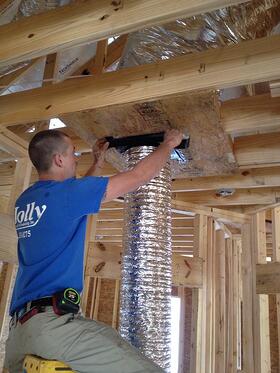 Conducting their business on paper, Tyler and Megan ran into many of the same challenges that other home service businesses do: incomplete paperwork and invoices, wasted man hours, and most critically, no "big picture" data that could give them insight into how well their business was actually running.

For a while, that was okay. Jolly Heating & Air Conditioning was a community staple HVAC service with loyal customers and a solid reputation.

But then they noticed a similar business in Phoenix, AR that had grown remarkably from a $2 million business to a $32 million dollar business in just eight years. That was eye-opening and inspired Tyler and Megan to take a hard look at their own company.

When they did, they realized that when it came to potential growth, they had a lot more questions than answers.

"The number one thing we didn’t know is where we were making money or losing money. Everything was a guess," said Tyler. "and we’ve found out... we could probably be more successful when we see where we’re not efficient, where we are efficient, and what we need to adjust.”

For instance, Tyler and Megan knew roughly where the “peaks and valleys” of job volume were throughout the year, but lacked the pinpoint information needed to chart these trends. If they had, they would’ve been able to deploy the resources they have to boost their revenue in the seasons when knew call volume would drop.

Another area where they knew they were lacking: advertising. Tyler and Megan had tried buying ads in the past, but they never implemented a formal campaign due to the lack of accurate ROI reporting.

"There’s a lot of stuff left on the table -- a lot of calls, a lot of opportunities on the table just because we’ve never had a budget [for advertising]," says Tyler. "That’s always been a problem for us because it seems too expensive to buy this advertisement or that advertisement because we don’t know how much we can spend."

Tyler and Megan have now implemented an outbound phone campaign to generate more revenue during their slow months. "We're calling customers that may not have maintenance agreements with us... and getting those signed up and moving," says Tyler, "and trying to shift our maintenances, or the bulk of them, to those valley times."

The company has also started to lay the foundation for future advertising efforts by: 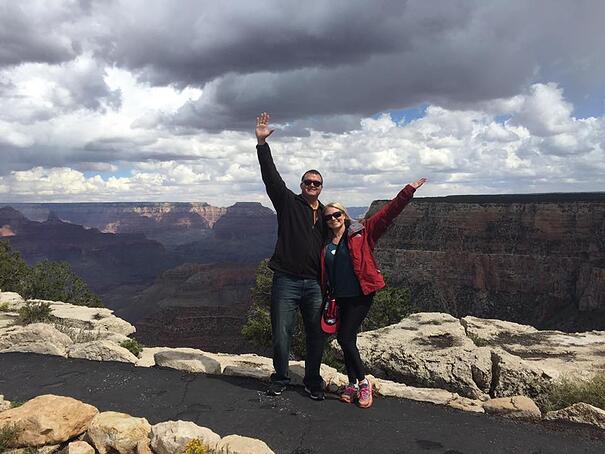 “It Sets Us Apart” Overall, Tyler and Megan believe that the course ServiceTitan has set their company on is not only promising, but has already started to distinguish them from their competitors.

"There aren’t many companies in our town that are doing paperless, only one or two more... right now it sets us apart a little bit to get us into the door," Tyler says. 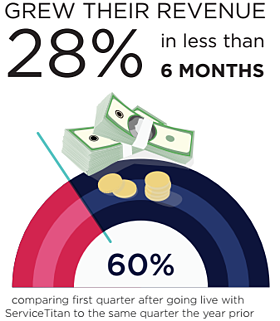 More importantly, it's giving them an understanding of their business that's never been possible before.

Just four months into running ServiceTitan, the business has grown revenue by 28% from six months ago due to making smarter strategic decisions based on real-time data.

"I would definitely say that making us more aware daily of what it is we’re doing has probably helped us concentrate on pricing," Tyler adds. "I know we’ve altered that a little bit, so we’ve been a little more profitable."

Jolly Heating & Air Conditioning have only just begun to tap into the potential of ServiceTitan’s capabilities, but their story is already typical of many independent businesses that have coasted on word-of-mouth but have never had the raw data needed to bring them to the next level.

In His Own Words: Justin Tarr on Being Black in the Trades

In this article, we’ll discuss how ServiceTitan’s plumbing software can help you improve your entire invoicing process, provide better customer service, and get paid on time i...

‘Love at First Demo’: ServiceTitan is No. 1 in G2 Field Service Manage...

ServiceTitan ranks No. 1 in G2’s ranking of field service management software. Find out more from the users who gave ServiceTitan top marks — its customers in the trades.

In His Own Words: Justin Tarr on Being Black in the Trades